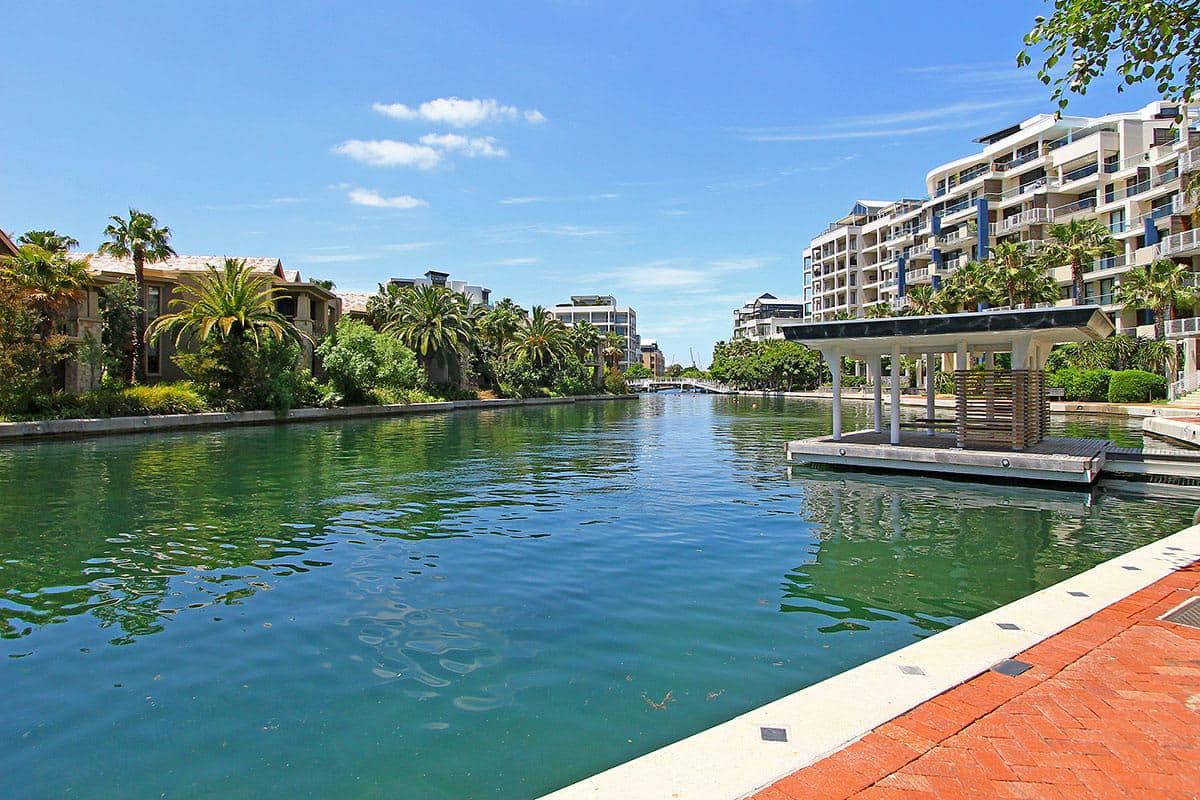 Staying in a holiday apartment at the V&A Waterfront in Cape Town is an ideal choice if you want to be near a multitude of family-friendly entertainment options.

Fine dining restaurants, upmarket shops, and various exciting activities are all at your disposal while you have easy access to all of Cape Town’s top attractions and beaches.

Read on to discover what makes the Victoria & Alfred Waterfront such an exciting place and why it is so popular among families with children of all ages.

The city of Cape Town started out as a refreshment station for ships sailing from Europe to India. Cape Town was just right as a halfway stop and had fresh water and food for sailors and tradesmen travelling on the open sea.

The harbour has always been at the heart of the city and over the years, it has grown into a commercial hub. Then, about 20 years ago, construction began on what would become the V&A Waterfront.

This impressive entertainment and shopping complex has become South Africa’s most visited tourist attraction. It is also one of the most successful harbour developments in the world.

The Cape Town Waterfront is beautiful, cosmopolitan and vibrant. Built around the sea and working harbour as well as shops and gourmet restaurants, it gives visitors a unique experience of shopping, relaxation, entertainment and enjoyment.

In terms of accommodation, some of the finest properties available in the city are found at the Waterfront Marina.

Why stay at the Waterfront in Cape Town?

While there are many accommodation options in Cape Town, the luxury self-catering apartments at the V&A Waterfront Marina make sense on several levels. There is never a parking problem, for instance, as one might find in busier areas. And safety and security is also not an issue – the residential complex has world-class security.

Furthermore, the location is central and only five minutes from the city centre and major highways in the city. Also, the quality of the accommodation is superb and ideal for holidaymakers looking for hassle-free, exceptional accommodation.

There are many different accommodation options. From studio apartments to spacious three-bedroom places with balconies and terraces overlooking the canals waterways. Even penthouse apartments are available with breathtaking views of the sea, Robben Island and Cape Town city.

Need some advice on booking your accommodation?

Why not give us a call or email us for tips on how to secure your Cape Town V&A Waterfront Accommodation. We are the experts on luxury self-catering accommodation and would love to help you plan your dream holiday in the city.

What to do at the Waterfront?

If you stay at one of the luxurious apartments near the V&A Waterfront, you have the option of many activities that you can simply walk to.

You could spend several days exploring the many attractions in and around the Waterfront and find yourself never becoming bored at all. That is the beauty of the V&A Waterfront.

We discuss some of the top things to do below.

One of Cape Town’s top attractions is the Two Oceans Aquarium. It is one of the finest showcases of Cape Town’s exceptional marine and oceanic heritage.

Conveniently situated at the Waterfront, it is a must for families, with easily accessible walkways for prams and strollers between the various levels.

There are continuous and shaped windows, tunnels and exhibits with interesting species, including the predator tank, which will delight both young and not-so-young visitors. The jellyfish gallery is a highlight and the penguin exhibit is always a hit with children especially.

There is a play area for the little ones too where there are crafts and puppet shows.

The shopping experience at the Waterfront is wide-ranging and diverse.

There are five shopping districts with over 450 stores with eclectic boutiques and upmarket shops as well as craft markets, arty vendors and stalls with local arts and products.

Clothing and jewellery as well as books, fine art, handmade chocolates and specialist homeware are some of the many products to be found.

There are beauty salons, spas and hair salons as well as supermarkets and souvenir shops.

Several fine restaurants offer from seafood to French bistro dining experiences and there are more popular grill houses too.

Not many places would qualify having a drink as an activity – but in Cape Town there are so many places for a scenic sundowner.

At the Waterfront there are quite a few options, with the Grand Café & Beach topping the list – with real beach sand and tables outside, the beach café setting is complete.

Then there is also the Shimmy Beach Club and at the Bascule Bar at the Cape Grace hotel, visitors can try a sophisticated whisky tasting experience.

The Cape Town Comedy Club is a wonderful destination for visitors who would like to enjoy a night out, get a taste of the local comedy scene while enjoying a meal.

The club is situated in The Pumphouse, a historic building in the Waterfront, at the entrance to the complex. The club usually has a line-up of local as well as international artists, has live music as well as an MC and it is a popular hang out for locals too.

For visitors who enjoy the culture scene and like a few good laughs, the Cape Town Comedy Club will not disappoint.

When ambling all over the Waterfront, it may be worth visiting the Chavonnes Battery Museum – especially for history buffs.

It was built as a fortification for the city of Cape Town in the 18th century and was part of the Castle of Good Hope. It served as a stone wall on the western edge at the water’s edge.

There were 16 mounted guns ready to fire and able to reach 180 degrees. There was a prison here as well as a quarantine wing.

Nearby, visitors can also see the Clock Tower. This Victorian tower belongs to the historic Cape Town harbour and was the original Port Captain’s office.

Built in 1882, it features a clock that was imported from Edinburgh. The tower has been painted the same colour red as it was in the 1800s and the paint was carefully matched to the original colour to ensure it remains authentic.

There are various yacht excursions, pleasure rides and sailing possibilities at the Waterfront.

These range from harbour cruises to ocean trips and sundowner outings on boats, catamarans or bigger sailing vessels. Children love these excursions and there are special life jackets for them.

The views of Table Mountain and the ocean are breathtaking and sometimes seals and dolphins come to frolic next to the boats.

These rides can be booked at the Waterfront at the harbour side and there is usually one leaving every half hour.

The Cape Wheel is a newish addition to the Waterfront and consists of a giant observation wheel with 360-degree panoramic views of Cape Town. Each of the 30 cabins is fully enclosed and air-conditioned.

The views are of Table Mountain, Robben Island, the city of Cape Town as well as the distant Paarl Mountains. The wheel goes up about 40m but is completely safe and secure.

Two of the cabins are wheelchair friendly.

Families will want to know where they can take the little ones to play! The Waterfront has a lovely playground area with a fountain as well an extended jungle gym with plenty of opportunity for children to play.

It is close to restaurants and the take-away section of the V&A Waterfront so you are able to order something to eat or drink while the kids are able to burn some energy on the playground.

Some of the restaurants inside the mall also have indoor play areas and the info station in the Waterfront will be able to point you in the right direction.

One of Cape Town’s biggest attractions, Robben Island is this island about seven kilometres from land and visible from the Waterfront.

It is a small bit of land only a few metres above sea level and the place where former president and human rights icon Nelson Mandela was imprisoned for 27 years during the apartheid regime.

Robben Island is a national heritage site as well as a UNESCO World Heritage Site.

Even though it is no longer a prison, many visitors to Cape Town make the journey for the cultural and historic significance as well as the views of Cape Town from the city.

These include fabulous views from Signal Hill as well as longer trips to Hout Bay and Kirstenbosch, where the well-known botanical gardens are.

Many visitors to the marina residential complex are surprised by how quiet and scenic it is.

Despite being a five-minute walk from the V&A Waterfront along lovely paths, the apartments are situated away from the hustle and the bustle. This ensures that you and your family are able to enjoy the peace and quiet while on holiday.

Whether your apartment faces the waterways and canals, or the yacht basin and the ocean, you are assured of a five-star view from your designer apartment.

Waterfront accommodation allows you and your family to holiday in style without worrying about your personal safety. The apartment buildings have controlled access and security guards and once inside the residential area, there are CCTV cameras as well.

Walking to and from the Waterfront is an easy and enjoyable stroll, completely safe for toddlers, moms with strollers or families taking a leisurely amble.

Apartments to rent at the Cape Town Waterfront

Luxury accommodation close to the V&A Waterfront is rented out on short and longer-term basis. This means whether you want to come for a few days, a few weeks or even months, there is a holiday apartment available to rent.

A big advantage of booking a luxury Waterfront apartment is the peace of mind that comes with being in a secure complex with controlled access.

In addition, the Cape Town Villas team is always ready to help you with any queries or advice you might need. Daily housekeeping ensures that you don’t have to worry about the dishes or tidying the rooms.

The scenic location invites you to go strolling near the water’s edge and spend some quality time with the children, playing in the landscaped gardens, watching boats come by.

When it comes to looking for accommodation, the holiday apartments at the V&A Waterfront Marina in Cape Town tick all the boxes:

Moreover, the Waterfront is perfectly located to give holidaymakers easy access to all the must-do tourist activities around Cape Town.

The Cape Town Villas accommodation portfolio has a range of serviced self-catering apartments at the V&A Waterfront. Our property pages are user-friendly with professional interior photographs to give you a good idea of all of the features.

See something you like? Have a question? Please feel free to give us a call for more information or friendly advice. We are the Cape Town holiday specialists!

If your family or group is large, and you need a bit more space, browse through our selection of  luxury villas in Cape Town and read our guide on choosing accommodation for your group.

A local villa expert will help you to select the ideal area and property.